which SMB should we buy?

What's the differences between SMB and DSMB?

There’s a difference between a surface marker buoy (SMB) and a delayed surface marker buoy (DSMB), although both essentially accomplish the same goal. You’ll generally use an SMB while on the surface in order to make yourself more visible to boats. You will deploy a DSMB while you’re still underwater, to alert those the surface that a diver is below and either decompressing or ascending.

So, when and why would you need to use either?

After a long dive on a deep reef, you can’t wait to get to the boat and look through your pictures. But because you followed fish and other marine life around, you’ve incorrectly navigated and lost the boat’s position. You and your buddy surface with minimal air and see the boat off in the distance. Way in the distance. There’s a bit of a current where you’ve surfaced and it’s putting more distance between you and the boat.

As you wave your arms to get the boat’s attention, a voice in the back of your mind tells you how futile the effort likely is. You can’t see the people, so what are the chances they see you? Then another voice pipes in as you resign yourself to the long surface swim against the current back toward the boat: Why the heck didn’t I buy an SMB? Fortunately for you, your buddy did. In a matter of seconds, a bright orange inflatable is sticking up five feet off the surface of the water, signaling your position. And once the boat has gotten the other divers onboard, they pull anchor and swing by to get you and your buddy, too.

Divers surface a good distance from the boat more often than you might think. Why is unimportant in this article; here we’ll focus on what you can do to prepare for the situation. You might think it’s easy to spot people floating on the surface of the water, but that is not the case. Next time you’re on a boat, look around if there are other dive boats and divers in the water nearby. Notice how hard it is to spot just a head and shoulders on the surface of the water. Imagine how much more difficult it is when that head and shoulders are even farther away. Now imagine the water is choppy with whitecaps, it’s windy and overcast, and dusk is descending. 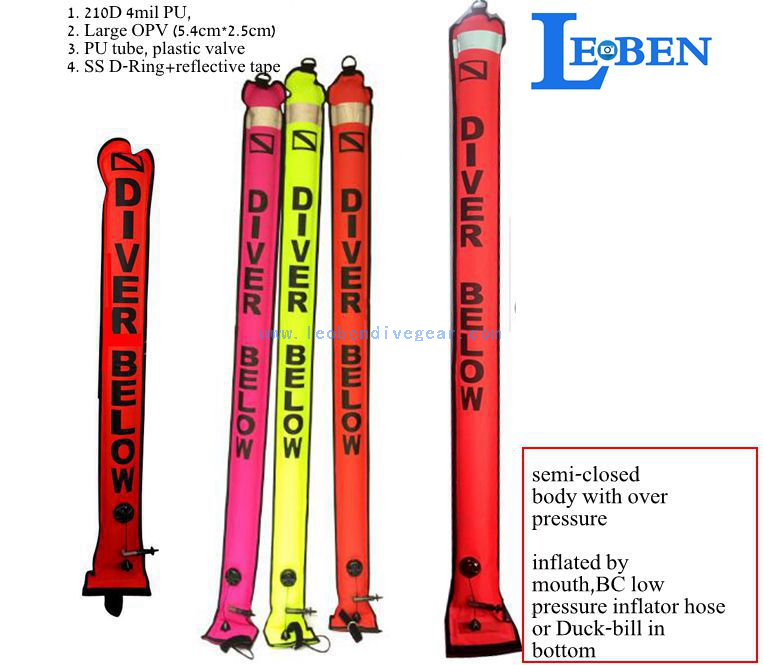 When or why would you use a DSMB?